Why do I always wake around 3AM?

There is a frustrating and all too common phenomenon that plagues many a sleeper. It goes something like this: Falling asleep is no problem, but in the early morning hours, one wakes agitated and restless. This can last up to an hour or two before finally falling back asleep. Upon rising is the feeling of being unrested, what we call “non-restorative sleep” in integrative medicine.

If this describes your sleep cycle, here are two related explanations that directly lead to actionable strategies to help you sleep through the night. The first is the traditional Chinese medicine (TCM) theory that posits that the body’s vital energy peaks in two-hour timeframes as it circulates through the body. Between 1 and 3 a.m. is when Liver function is most active. This concurs with Western biomedical physiology that understands that the body performs much of its repair and detoxification while asleep.

This brings up an important distinction that must be made at this juncture. TCM capitalizes an organ name when we are referring to it in Eastern medicine. This delineates the TCM organ and its holistic relationship with body, mind, emotions, and spirit. Thus, lowercase “liver” is the organ as we think of it in Western terms and our understanding of its physiology. There is overlap between the two medical paradigms. Both recognize the liver’s capacity to cleanse the body of toxicants, but the Eastern model upholds that the Liver is also responsible for cleansing our system of toxic thoughts and emotions. 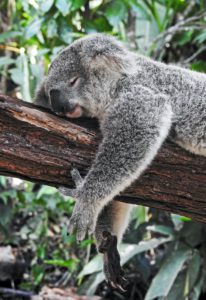 Waking around 3 a.m., at the end of Liver time, suggests that the body has worked hard processing environmental and emotional stressors. Dreams are more pronounced during the early morning hours as unresolved issues from the days and weeks prior play out in bizarre and disturbing dreamscapes. This alone can wake us up with a racing heart and mind, but a Western understanding of liver function grants another perspective to connect the dots.

The liver stores glycogen as a quick fuel source to tide metabolism over in between meals. This will provide about twelve hours of accessible glucose (sugar) after which the body breaks down adipose tissue (body fat) and liberates ketones for fuel. With a healthy and flexible metabolism, this shift is seamless and fasting for several hours is uneventful. If metabolism depends on sugar for fuel, the transition elicits a stress response by the body whereby the adrenal glands release the hormone cortisol to raise blood sugar.

A drop in blood sugar is a root cause of waking in the night, stemming from Liver’s increased need for energy to metabolize life in the form of dreams as well as the liver’s demand for fuel to detoxify pollutants. Whether the stress is physiological or emotional, metabolism is taxed and waking ensues as the elevation of cortisol from the adrenals is accompanied by a release of catecholamine hormones epinephrine and norepinephrine. These potent stimulating hormones will assuredly wake even the most sound sleeper. Of course, these hormones need not be tapped if blood sugar is balanced. Instead, becoming metabolically flexible is the key to staying asleep.

There’s a simple way to see if unbalanced blood sugar is at the root of sleep disturbance. Eat an early dinner and don’t snack until bedtime when you will consume one of the following: a teaspoon of raw honey, a slice of lunch meat turkey, a tablespoon of coconut oil. Try each separately and see which (if any) prevent waking at night. Depending on which one(s) work is a clue to how efficiently your metabolism is at burning fats for fuel instead of depending on sugar.

If metabolically inflexible, the raw honey will likely be the only thing that works. If metabolically efficient, ketones from the coconut oil will work best. A protein such as a slice of turkey burns slower than the quick sugar of raw honey, but ultimately can be converted into sugar by the liver in a process called gluconeogenesis. Some people do best with a higher protein diet and a slice of turkey will maintain their metabolic needs while providing a rich source of tryptophan, the precursor amino acid to melatonin.

This nightly dietary experiment can aid sleep in the short term, and clue you in to the resilience of your metabolism, but the long-term goal is to not need a snack before bed every night. The solution is twofold: mitigating stress to prevent a nightly cortisol spike and shifting one’s metabolism toward proteins and fats to become fat adapted. The former strategy can be achieved by journaling before bed to vent the day’s frustrations. The latter can be realized over time by having a regular diet of lower carb foods and practicing intermittent fasting or time restricted eating to strengthen one’s metabolism.

With both influences in place, stress hormones remain in check and sound sleep is restored. Understanding the different cultural interpretations of Liver/liver function is key to holistically addressing sleep as a metabolic disorder. Leverage the best of East and West and be rewarded with deep, restorative sleep.