The Promise and Peril of a Coronavirus Vaccine

If the State can tag, track down and force citizens against their will to be injected with biologicals of known and unknown toxicity today, there will be no limit on which individual freedoms the State can take away in the name of the greater good tomorrow.
— Barbara Loe Fisher, Co-Founder NVIC

Will global governments mandate that every citizen be injected with a vaccine for COVID-19? Does the greater good outweigh the repercussions of introducing an RNA vaccine into the human gene pool? These are serious questions with critical implications for the future of human health and medical freedom.

First, we must contextualize the current pandemic: We know far more now than at the beginning of 2020 when lockdowns were implemented until public health officials had a handle on the situation. After the main surge of the pandemic, we are fortunate to note that although this novel coronavirus is more transmissible than other seasonal illnesses like influenza, it is far less virulent than initially thought. The vast majority of those who contract COVID-19 recover, with case mortality less than 3% and trending downward. Actual mortality will be lower, perhaps under 1%, as those who are asymptomatic or have minimal symptoms may not seek testing. This was particularly true at the beginning of the pandemic when testing resources were limited.

Those most susceptible are the elderly with comorbidities. According to Centers for Disease Control and Prevention data, 94% of all deaths in the U.S. have occurred in those with one or more chronic diseases. It is in this population that the vaccine will be of the greatest benefit.

Yet rhetoric from many government health officials—sometimes parroted by mainstream media—is that life will not go back to normal until the vast majority of citizens are vaccinated. Never have we seen such a unified push and subsequent pushback by concerned citizens. A recent poll suggests that half of American adults would refuse a vaccine.

There are two logical reasons for this pushback (and a host of illogical and conspiratorial ones we can ignore). The first is the slippery slope of fear-driven exchange of privacy and freedom for security and safety. Does the fear of this disease grant governments the license to track our movements and mandate vaccination? 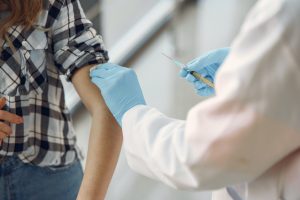 Fear mongering has been most striking in relation to what is being called a “casedemic.” Increased testing led to a surge in cases but not a commensurate spike in hospitalizations and deaths like we saw in the spring of 2020 in the northern hemisphere. Health officials predicted a bump due to schools being back in session and many states reopening for business, but it was not clear whether the end of 2020 would be as drastic as its beginning. Early data suggested that some areas, like New York City, that received the brunt of the first wave may have achieved herd immunity. If that were the case, other areas now experiencing a surge should have quickly followed suit.

The main reason for the early 2020 mortality spike could have less to do with the virulence of COVID-19 and more with a mild flu season. Those who may have succumbed to illness in the winter of 2019 to 2020 (elderly with comorbidities) were the “dry tinder” for the spring COVID-19 spike. If you compare historical data from the last few years, excess mortality data suggests that the pandemic has been blessedly mild.

That is the big-picture view afforded by hindsight, yet lockdowns, social distancing, and talk of widespread vaccination persisted. On the contrary, a safe transition to herd immunity without restrictions and vaccination could have been possible through what prominent epidemiologists have introduced in a harm-reduction model called “focused protection.” In this scenario, the vulnerable would be safeguarded while the majority of the populace would seek natural immunity to avoid further economic, psychological, and health-related collateral damage from continued lockdown measures. This can only occur in a wise society that is health-focused instead of disease-focused.

We must seriously question the institutional reticence to herd immunity as pharmaceutical companies race to milk the cash cow of vaccinating the entire world’s population. Is profit motivating the medical-industrial complex beyond what sensible science would dictate?

The second argument against promoting widespread vaccination is the introduction of a novel RNA vaccine into the human gene pool. This has never been done before. Perhaps there is nothing to worry about, or maybe an RNA vaccine will imbue some lucky humans with superpowers, but I don’t think it is alarmist to expect some serious short-term side effects and unforeseen long-term implications from a global RNA vaccine program. The former is an unfortunate reality of injecting adjuvants as some people will inevitably react, but the latter is a future we cannot realize until crossing that genetic threshold.

Keep in mind, medical science has been unable to develop a vaccine for any coronavirus, including the common cold. Esteemed lawyer and health advocate Robert Kennedy Jr. shares a concise history of the development of a coronavirus vaccine in a recent interview:

The government has been trying for almost thirty years to develop a coronavirus vaccine, and it’s been unsuccessful.

Beginning in 2002, there were three outbreaks of coronavirus. We called them SARS at that point and MERS.

The first SARS was a natural illness. It jumped from a bat to human beings. The second two were lab created that escaped and infected human beings. So the governments of China and a consortium of western governments all got together and put millions and millions of dollars into an effort to develop a coronavirus vaccine.

Between 2002 and 2012, 2014, they worked very hard to do that, and what happened is they developed about 35 vaccines. Four of them were really promising. They chose the four most promising, and they gave them to ferrets, which is the animal that is most analogous when it comes to upper lung respiratory infections.

The ferrets had a brilliant, robust and durable antibody response. Then something horrible happened. When those ferrets were challenged, when they were exposed to the wild virus they got horribly sick. They got inflammation throughout their bodies, and they died.

The scientists remembered that something very similar had happened in the 1960s where they had developed a vaccine for RSV, which is very similar to coronavirus. It’s an upper respiratory infection, ailment.

They had skipped the animals and given them directly to 35 children, and the children again had developed a very robust antibody response. But when those children were exposed to the wild virus, they got very, very sick, much sicker than the unvaccinated children. And two of those kids had died. It was a scandal.

They realized when this same thing happened with the ferrets, that there was something that they called enhanced immune response. It’s also called pathogenic priming.

What it means is that when you get the vaccine, it appears that you have an antibody response. But when you actually encounter the wild virus, you actually become much sicker, and it actually creates a pathway that that virus hurts you a lot more than with unvaccinated people.1,2

In summary, this is not a black or white issue in which everyone or no one should be vaccinated. Some will leverage the risk and wish to be vaccinated. Others will not. But in either case, individual freedom and logic should dictate that choice. We must prepare for the possibility that governments may attempt to overstep their jurisdiction, and in response we must present sound arguments to protect ourselves and future generations.

*Note: to receive notification of legislation on vaccine mandates in your state, visit the advocacy portal of the National Vaccine Information Center.