Digestion is a magnificently complex process requiring extensive interactions among several organ systems, yet one need not be a physiologist to garner an appreciation of the basics of the human digestive system. Knowledge of the inner workings of one’s gut can be an enlightening area of study, engendering thoughtful consideration of the old adage “You are what you eat.”

The essence of digestion is the breakdown of food into essential nutrients. The digestive tract is the place where the outside world gets transformed into raw materials that “flesh out” the body and mind. From the amino acids that make up muscles to the building blocks of neurotransmitters that mediate nerve impulses in the brain, the gut provides the physical machinery for consciousness to express itself. 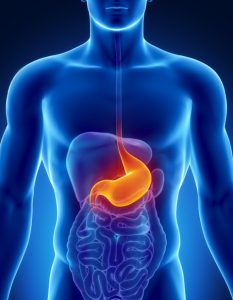 The gastrointestinal system is also a core component of the body’s immune system. Loss of gut integrity leaves the body vulnerable to infections and inflammatory conditions. With an intuitive awareness of this concept that long predated microbiology, Hippocrates, the father of modern Western medicine, proclaimed boldly, “All disease begins in the gut.”

Let’s study the process with a bit more scientific savvy than Hippocrates had access to and see if you come to the same conclusion.

Before food or drink ever cross your lips, your nervous system begins to digest the experience. What you see with your eyes and smell with your nose prompts the body into an initial response. If emotional associations exist with that food, any number of reactions can ensue, ranging from salivating to retching.

Next, your tongue confirms what the sights and smells are conveying about the meal. This allows your body to start producing the enzymes needed to digest that particular food or combination of foods, starting with the saliva in your mouth and continuing through the rest of your digestive tract.

From there, several overlapping systems go to work to process that food or drink, separating and refining the substance until it is either integrated into your body or separated for disposal. To simplify things, it is helpful to break down these systems into four broad categories as they arise from four distinct organs.

First, your stomach receives food and begins the breakdown process through the action of hydrochloric acid. When the pH of your stomach becomes sufficiently acidic (down to 1.5 or 2), your meal will be mostly liquified. This is particularly important with dietary protein, especially animal protein, for which a lack of stomach acid is a common cause of indigestion. If there is insufficient stomach acid, emptying of the stomach is delayed in a condition known as gastroparesis.

One should avoid drinking copious amounts of fluids during a meal as this could dilute stomach acid. However certain beverages, such as lacto-fermented drinks (kombucha, beet kvass, kefir), are rich in enzymes that supplement digestive function. Warmer beverages, such as hot tea, are also preferable to ice water as the latter requires additional digestive fire (energy) from the body to raise the liquid to body temperature.

The stomach contents empty into the intestines, where probiotics run the show. The gut microbiome is an exploding area of science where researchers are fast discovering scores of benefits and protective features from a healthy diversity of beneficial bacteria and yeast. These happy gut bugs further break down food, converting much of it, through their metabolism, into nutrients and immune factors. At the same time, the good bacteria populate the cell wall surface, crowding out a biofilm that would otherwise be susceptible to invasion by pathogenic infections. The number of these bugs is estimated to be in the trillions, and I strongly suspect that their collective function may be akin to and someday recognized as a unique organ system.

The liver and gallbladder also play a key role, producing and storing bile to be released into the small intestine. Bile is excreted to emulsify fats from your meal into fatty acids, allowing the fat-soluble vitamins A, D, E, and K to be liberated and absorbed along the intestines. On the pH scale, bile is alkaline and helps neutralize the strongly acidic chyme exiting the stomach. In addition, the bile duct is the route that the liver uses to rid itself of byproducts from its work, such as bilirubin from the recycling of red blood cells. The regular excretion of bile into your intestine is also prerequisite for optimal colon health, where bile salts serve as a lubricant. Many cases of constipation due to dry stool can be remedied not in the colon but further upstream by helping decongest the liver and gallbladder to allow sufficient bile flow.

Finally, the pancreas contributes by producing enzymes to very finely cleave food particles for absorption along the intestines. Enzyme activity begins in the mouth for carbohydrates and continues to function throughout the rest of the digestive tract for fats, proteins, and carbohydrates. Enzymes, like everything else, are manufactured from the nutrients in your diet, so consumption of processed foods depleted of vital nutrients will create a vicious cycle of sluggish digestion.

All four of these digestive components — stomach acid, probiotics, bile, and enzymes — need to be in good working order for optimal digestion. If any one system shows signs of stress, digestive problems ensue and other body systems become vulnerable. If you suffer from regular episodes of gas, bloating, reflux, loose stools, diarrhea, constipation, brain fog, or fatigue, be aware that what you are receiving from your body is clear feedback of a breakdown in the proper functioning of your digestive process.

It is a sad commentary of Western culture whereby most people accept these symptoms as a normal consequence of everyday eating. Do not make this mistake and ignore the message from your body that may translate in to a number of systemic health problems. Biomedical research is increasingly revealing connections between the health of the gut and such wide-ranging problems as neurologic disorders and autoimmune diseases.

It is no exaggeration then to echo the words of Hippocrates and thusly state that tending to proper digestion is the basis for a lifetime of vibrant health.