Skin cancer is the most prevalent cancer diagnosis in the United States. One risk factor for the development of skin cancer is abnormal skin growths, such as moles and skin tags. Another is the presence of red, patchy skin indicating precancerous skin cells damaged by ultraviolet light, a condition known as actinic keratosis.

Most people don’t regularly visit a dermatologist for a whole body scan. Areas of suspicious precancerous growth are either discovered during an annual physical or noticed at home.

For instance, if a mole that has looked the same for years starts to grow larger, have an irregular or jagged border, or change color, it is advisable to visit a dermatologist for a possible biopsy of the area to differentiate malignancy from benign growth.

If the growth is malignant, surgical removal and/or radiation may be recommended. This is the standard of care in conventional oncology, though I have come across several claims of natural, topical treatments for skin cancer. One of those is a preparation called black salve that contains the herb bloodroot and zinc chloride, among other caustic ingredients.

I have never been diagnosed with any form of skin cancer (my body prefers non-Hodgkin’s lymphoma), but I do have plenty of moles decorating my fair skin. I was curious to test the claim of black salve to remove an abnormal skin growth and decided to experiment on myself for the sake of science and the edification of my inquisitive readers. What follows is an account of my self-experimentation—and success—with using black salve to remove a large mole on the upper right quadrant of my chest. I make no claims, implied or experientially, that black salve could offer analogous success for the treatment of skin cancer.

Here is the procedure I followed, composed as if I was instructing myself through the process: 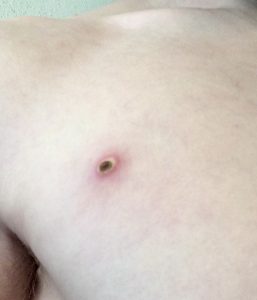 This process was clean and efficient, resulting in only the slightest hint of scarring. I’m not sure a surgeon’s scalpel could have done as neat a job. Black salve is widely available online and marketed for the treatment of skin cancer, but I can’t comment on its efficacy for this purpose as I was only treating a mole with an appearance that had not changed in recent memory.

This experience has piqued my curiosity about alternative treatments for skin cancer, though the standard line from medical research is to strongly warn against self-treatment with black salve. There is at least one case study of treatment purportedly going awry.

In Europe, the oncolytic viral therapy Rigvir® was developed and approved in Latvia, Georgia, Armenia, and Uzbekistan to treat melanoma, yet research and adoption by conventional oncology in the U.S. is nonexistent.

Whether topical or internal, it seems self-evident — at least to me — that skin cancer should be easier to treat naturally because of how efficiently remedies can be applied to the area. Some tumors are deep within the body and evade detection and removal by the immune system, but skin malignancies are visible and accessible. Sun, oxygen, and topical treatments can all be directly applied to the area alongside internal immune-regulating therapies.

As for the controversy regarding sun exposure and increased risk of melanoma, some evidence suggests that, barring a sunburn, regular sun exposure may help prevent melanoma and a number of other cancers, such as breast, colon, and prostate cancer as well as non-Hodgkin’s lymphoma. Optimal vitamin D production is but one of several proposed mechanisms for this reduction in cancer incidence with safe sun exposure.

Ultimately, I agree with the conclusion of a review of black salve published in The Journal of Alternative and Complementary Medicine. The authors state, “The concept of black salve as a cancer treatment is not unfounded, as some escharotics agents have been shown to have anticarcinogenic properties, but randomized controlled trials comparing them to standard therapies are lacking.”

The best way to protect the public is to provide evidenced-based natural options through rigorous research of holistic remedies. Without the ability to patent, market, and make a profit from the sale of black salve, that research may not take place and patients will continue to self-experiment outside of medical supervision.