You may have heard anecdotes about apple cider vinegar treating just about everything except death. Though not a miracle remedy, raw and organic apple cider vinegar does have a lot of therapeutic applications. It is inexpensive, readily accessible, and has a long shelf life, so no kitchen cupboard should be without it.

The most well-known use for apple cider vinegar is as a digestive tonic. Fermentation of apples produces organic acids that, when consumed, supplement the action of hydrochloric acid in the stomach. As an aid to digestion, apple cider vinegar taken prior to a meal is an excellent remedy for indigestion and heartburn. The increased acidity encourages timely emptying of the stomach, leaving it free of partially digested food that could reflux up the esophagus. 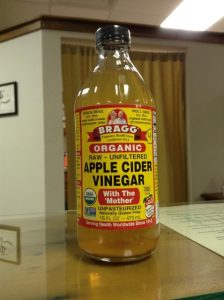 The acetic acid in apple cider vinegar supports the growth of beneficial bacteria throughout the digestive tract, which thrive in a slightly acidic environment. This is similar to the action of lactic acid-forming bacteria (Lactobacillus) and yeast commonly found within probiotic supplements. These strains of microbes acidify the gut through the production of lactic acid, similar to the action of acetic acid found in vinegar.

Another fairly common use for apple cider vinegar is treatment of arthritis. The acidity of the vinegar may be the driving factor behind this claim. Metabolism creates a host of byproducts that need to be processed by the liver. Among the ones that are implicated in arthritis are compounds that are strongly alkaline, the most alkalizing of which is a compound called guanidine.

Your body uses methyl groups (from B vitamins) and acetic acid to render guanidine into creatine. In the absence of either the methyl groups or the acetic acid, the strong alkalinity of guanidine causes the precipitation of minerals, particularly calcium (the most abundant mineral in the human body), into intracellular spaces. The calcification of joint tissue is one distinct disease process that can underlie the formation of osteoarthritis.

Neutralization of guanidine is catalyzed by the thyroid gland. It stands to reason that function of the thyroid gland, if unburdened with this task by the apple cider vinegar, may be enhanced by. This could explain the “pick-me-up” and weight-loss effects attributed to apple cider vinegar. The increase in energy could also stem from an improvement in digestion and the subsequent increase in nutrient absorption.

To aid digestion, mix 1 tablespoon of apple cider vinegar with a few ounces of water and drink the mixture just prior to meals. As a general tonic, add 1 tablespoon apple cider vinegar and 1 teaspoon of honey to a large bottle of water and shake to combine. Drink the mixture throughout the day. This tonic is also works well as a recovery drink after exercise.